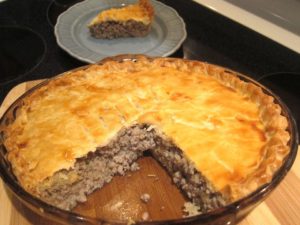 Tourtière, also known as pork pie or meat pie, is a traditional French-Canadian pie enjoyed throughout Canada and New England. It is made from a combination of ground meat, onions, savory seasonings, and baked in a traditional piecrust.

As our family Christmas traditions continue to evolve over the years, I often think about the old-fashioned customs and foods from my youth. I remember attending Midnight Mass on Christmas Eve, then returning home to feast on meat pies smothered with a generous amount of ketchup before we were ushered to bed so Santa could deliver presents.

As the years went by, and family members got older, the tradition of Midnight Mass gave way to Christmas Eve Mass at an earlier hour but the ritual of serving tourtière after Mass continued for many years.

Tourtière, also known as pork pie or meat pie, is a combination of ground meat, onions, spices, and herbs baked in a traditional piecrust. There are many variations of tourtière throughout the regions of Franco-American communities and Canada and even among members of the same family.

Most recipes include a combination of ground pork and beef, but it is not unusual to include venison or other game meats in the pie. Almost every family had a tante or mémère (aunt or grandmother) who had a tourtière recipe with a secret ingredient or two.

Some versions of tourtière are made from only ground or chopped pork, but my family always made it with a mix of pork and beef. Several accounts suggested that using potatoes was frowned upon because that meant you could not afford meat. In this recipe, I feel the potatoes are essential to help bind the ingredients together.

The poultry seasoning that is historically used by many families in New England is Bells Poultry Seasoning and is still made today. If you can’t find Bells, go ahead and substitute your favorite poultry seasoning.

PLEASE, USE THE NEXT PAGE BUTTON OR OPEN BUTTON BELOW FOR THE RECIPE AND INGREDIENTS.