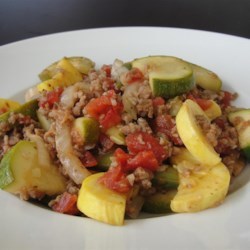 Cook and stir sausage in a large skillet over medium heat until sausage is crumbly and no longer pink, about 10 minutes; drain excess grease, reserving 1 tablespoon of the pan drippings. Transfer drained sausage to a large bowl and set aside. Cook and stir green bell pepper, onion, and garlic in the pan drippings until green pepper is soft, about 8 minutes; transfer to bowl containing sausage.

Swirl olive oil in the hot skillet and cook and stir zucchini and yellow squash in hot oil until slightly softened, about 8 minutes; stir in tomatoes and Italian seasoning. Season with salt and black pepper. Bring the mixture to a boil and simmer until squash are tender, 10 to 15 more minutes.

Stir sausage and vegetables into skillet, raise heat to high, and bring mixture to a boil. Reduce heat to medium and cook, stirring often, until the liquid has reduced, about 15 minutes. Spread the mixture into a 9×13-inch baking dish and sprinkle Cheddar cheese over the top.

Bake in the preheated oven until the mixture is bubbly and the cheese has melted and begun to brown, 25 to 30 minutes.