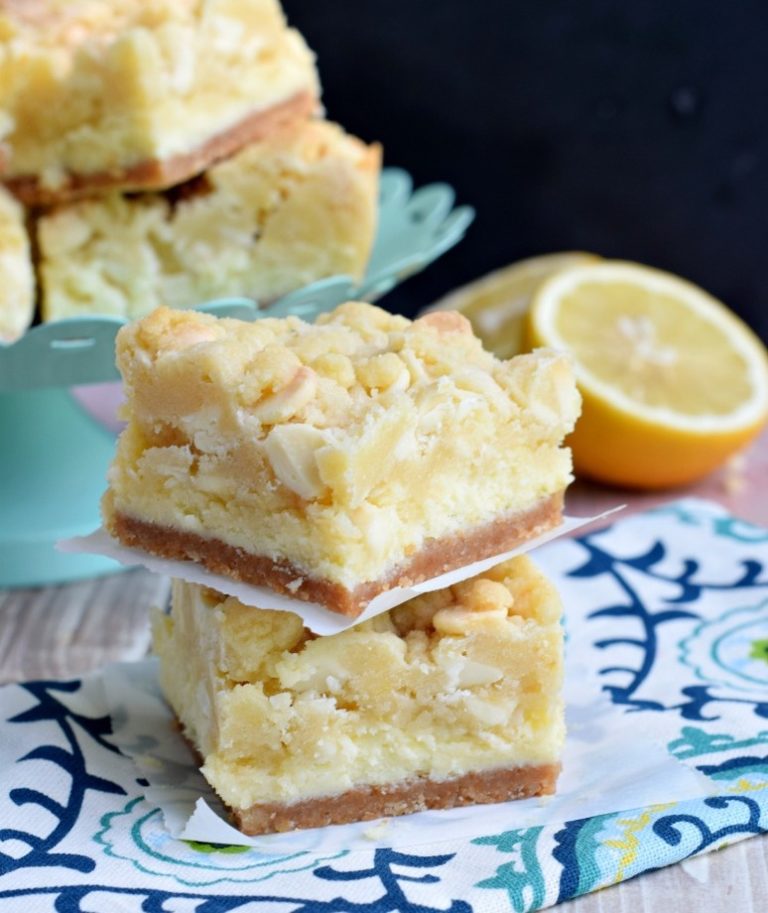 Directions
Preheat oven to 350 degrees. Butter a 13 by 9-inch baking dish, set aside.
For the shortbread layer:
In a mixing bowl whisk together flour, powdered sugar and salt. Using a pastry cutter or fork, cut butter into flour mixture until it resembles coarse meal. Pour mixture into prepared baking dish and spread and pat into an even layer. Bake in preheated oven until set, about 15 – 18 minutes. Set aside to cool slightly while preparing fillings.
For the lemon layer:
In a mixing bowl whisk sugar and flour, then add in lemon zest, lemon juice and eggs whisk until well blended. Set aside (don’t pour into crust yet, you don’t want it to soak into the shortbread layer while you’re preparing cheesecake filling).
For the cheesecake layer:
In a mixing bowl, using an electric hand mixer set on low speed, cream together cream cheese and granulated sugar until smooth, about 30 seconds. Mix in eggs one at at time adding in vanilla with second egg. Mix in 1/4 cup sour cream. Tap bowl against countertop about 10 times to release any large air bubbles.
Pour lemon filling over crust then evenly pour cheesecake filling over lemon layer. Skim off any air bubbles. Gently spread cheesecake filling into an even layer. Bake in preheated oven until filling only jiggles slightly, about 29 – 33 minutes. Remove from oven and allow to cool at room temperature 45 minutes then transfer to refrigerator and chill at least 2 hours.
For the sour cream layer:
In a small mixing bowl whisk together sour cream and powdered sugar. Spread into an even layer over chilled bars. Cut into squares. Store in an airtight container in refrigerator.
Source : allrecipes.com