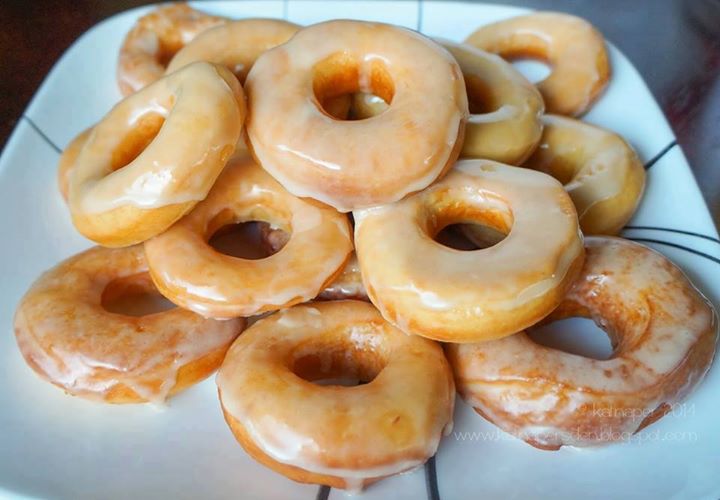 Make the tangzhong by mixing the flour and water and heating it while stirring constantly until it forms a sort of paste. You know this when swirl lines form as you stir. Set this aside and let it cool. I like to put it in a bowl and cover the top with cling wrap placed against the mixture so that a ‘skin’ doesn’t form as it cools.
Dump all the ingredients for the dough into a mixer with a dough hook attachment (or you can use a bread machine like she does in 365 degree Oven) and knead for about 15 minutes until it can be stretched to form a window pane. I set my Kitchenaide to about 3.
Transfer to a greased bowl and let rise for 45 minutes, then punch down and let rise for another 30 to 45 minutes.
When the dough is done, roll it out into a rectangle onto a floured surface until its about 1/2 inch thick.
You can use a large circle cookie cutter (365 recommends a 3 inch circle) to cut a large circle and a smaller one to cut the ‘donut hole’. I just used one of these because I had one.
Use a flat spatula to place donuts on a floured parchment sheet, making sure the donuts are not touching one another since they will expand. Cover loosely with plastic wrap and let rise for 1 hour. I’ll explain why I recommend using parchment paper instead of just any floured surface later.
Make the glaze by mixing all the ingredients together.
Heat about 2 inches of oil in a pan to 375 degrees Fahrenheit (190 degrees Celsius) since this is ideal for deep frying. In my case since I don’t have a thermometer, I tested the oil for the proper ‘hotness’ by dropping a bit of the donut dough into the oil. Its hot enough when the dough floats right back up in all its golden brown glory after a few seconds (about 4 to 5 secs). If your dough burns then its too hot. Now for the reason I like placing the donuts on parchment is so I can cut out each section with a donut on it and use the parchment to ‘pick up’ the donuts and drop them into the oil.This way, I don’t disrupt the donut’s shape. Or you can always use a flat spatula again to pick them up and drop them into the oil.
Lower a few donuts at a time into the hot oil and fry for 30 to 45 seconds until golden brown. Insert a chopstick (or barbecue stick into the hole and flip over to fry the other side for another 30 to 45 seconds or until golden brown. Remove and place on a rack to cool. If you’re worried about excess oil, put a paper towel over the cooling rack to absorb excess oil.
When its cool enough to touch, dunk donut halfway into the glaze to coat. Place on a clean rack or a plate and let it cool for five more minutes just until the glaze sets. Serve with a hot cup of coffee and enjoy!

A few other things:
Like she said in 365 degree Oven, its best to make these just before you want to eat them so that they are fresh but I discovered that you can keep the unrolled dough in the fridge over night and just roll it flat next morning and cut out your donuts then. You might have to let them rise longer than an hour before the donuts are fluffy enough to cook though. Otherwise it still tastes the same.

If you don’t like the glaze then you can roll them in granulated sugar mixed with cinnamon or you can add sprinkles to them after you glaze them.