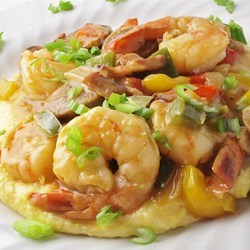 Bring water, grits, and salt to a boil in a heavy saucepan with a lid. Stir in half-and-half and simmer until grits are thickened and tender, 15 to 20 minutes. Set aside and keep warm.

Sprinkle shrimp with salt and cayenne pepper; drizzle with lemon juice. Set aside in a bowl.

Cook and stir green, red, and yellow bell peppers, onion, and garlic in the bacon drippings until the onion is translucent, about 8 minutes.

Stir shrimp and cooked vegetables into the andouille sausage and mix to combine.

Melt butter in a saucepan over medium heat; stir in flour to make a smooth paste. Turn heat to low and cook, stirring constantly, until the mixture is medium brown in color, 8 to 10 minutes. Watch carefully, mixture burns easily.

Pour the butter-flour mixture into the skillet with andouille sausage, shrimp, and vegetables. Place the skillet over medium heat and pour in chicken broth, bacon and Worcestershire sauce, cooking and stirring until the sauce thickens and the shrimp become opaque and bright pink, about 8 minutes.