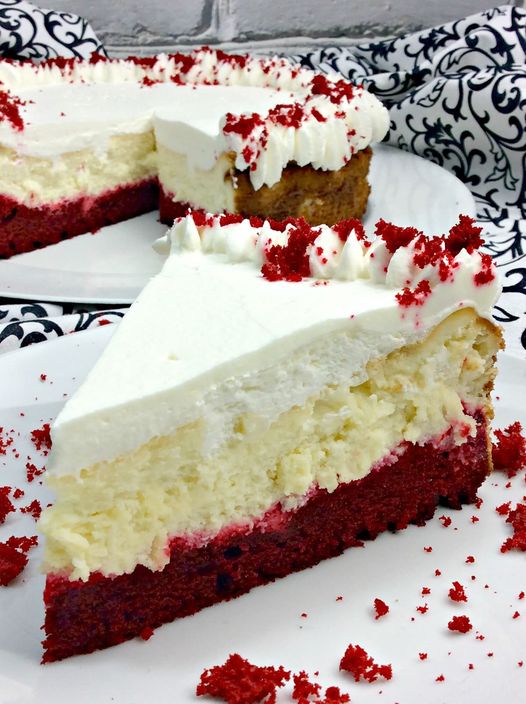 Red Velvet cake layer:Preheat oven to 350Fflour one springform 9″ cake pan.Prepare red velvet cake batter according to box directions. Pour your batter in the prepared cake pan.Bake for 30 to 32 minutes.Let cool slightly in cake pan then remove, use a cake leveler to make sure the top is even and flat -set aside.Make the cheesecake layer:In a large bowl using a hand mixer or the bowl of a stand mixer fitted with the paddle attachment, beat cream cheese and sugar until fluffy and combined, 3 minutes.Add eggs, one a time, until combined.Add sour cream, flour, vanilla, and salt and beat until combined.Pour filling into a SEPARATE 9′ springform pan, use parchment paper to line it then bake until only slightly jiggly in the center, about 1 hour.Let cool slightly, then transfer to the freezer to cool completely and firm up before assembling on top of the red velvet cake layer. Use a cake leveler again if needed/desired to achieve even layers.NOTE if you would prefer to bake them together, just bake the cake first in the springform pan, then add the cheesecake layer on top of the baked cake & bake until the cheesecake layer is slightly jiggly- then stick in freezer until completely cooled & firm.Make whipped frosting:Add all the ingredients to a mixing bowl.Using a large balloon whisk, whisk together the ingredients by hand for about five minutes until soft peaks start to form.You’ll know the whipped cream is ready when the cream has formed soft peaks and holds onto the whisk.Be careful not to overdo the whisking –Top the Red Velvet cake with the cheesecake layer carefully.Then spread the whipped cream over the top of the cheesecake.Use a decorators pastry tip to create whipped dollops on the edge.Garnish with red velvet cake crumbs and serve.