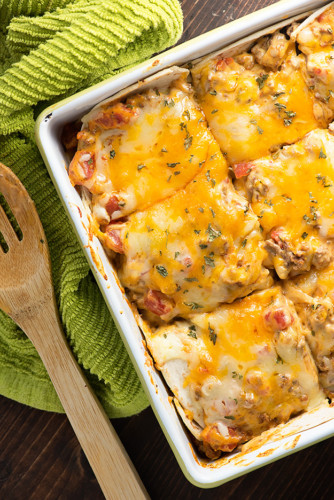 – Oh, yes, that’s right. I made you all a Mexican lasagna with tortillas instead of noodles. It’s one of those easy weeknight recipes that the entire family gets excited about when they see it come out of the oven, all steamy and cheesy and gooey.

– I mean, my family love love loves taco night. Thank goodness for that, because we seriously eat some form of tacos every couple of days. My fried tacos are always a hit.
In fact, I’ve been on a major scrambled egg taco kick lately. It’s the easiest dinner in the world – scramble some eggs, stuff them in a steamy tortilla, top with cheddar, and drizzle on some hot sauce. It’s probably the most perfect comfort food on the planet and it takes about 5 minutes to make.

– I’m tweaking this tonigh by using shredded chicken and chicken taco seasoning. I’m also using less sodium tortilla chips and an extra can of diced tomatoes while reserving the juice to add as needed. I also used seasoned diced tomatoes with garlic, basil & oregano. The other one was roasted garlic. I think they’re both by Hunt’s. I used whole wheat macaroni and did the whole box to use whatever was left over for another meal. For the cheese, I had Mexican shredded cheese on hand and it blended perfectly. Some of us tossed it with sour cream, salsa, Tapatio and green onions. This has become another family favorite! Healthy & delish!

– Not half bad. I thought it would be like hamburger helper but it tasted better. I used all cheddar which I mixed into the casserole before baking plus topped it with extra. I didn’t put the crushed tortilla chips on until it was out of the oven and I used the sour cream & drizzled hot salsa over the whole thing. Pretty easy & hubby thought it was decent.

– Forks. Pfft. Overrated. But, I love the man, so I turned my love of tacos into this Mexican lasagna with tortillas! The recipe is just seven ingredients and beyond simple to throw together!
This taco lasagna is such an easy weeknight dinner and perfect for those nights when you’re tired of regular tacos.

– I use a can of Nacho Cheese Soup in here, because hello. Nacho cheese! You can swap in cheddar soup or cream of chicken/mushroom soup, if you prefer! You could also probably get away with just melting up some Velveeta with milk in place of the canned soup. I mean, this is a pretty simple recipe and I can’t imagine you’ll be able to mess it up!

– Yummy “as given” but tweaked it just a tad: added garlic, added cumin, added more cheese, added canned corn, added kidney beans, omitted the chips, and only used cheddar cheese, but still a wonderful recipe!!! I used GF noodles. It made a lot so we can use the sensational leftovers, which only get better with time. Thanks a bunch!

Preheat oven to 350 degrees. Spray a 9×9 baking dish with non-stick spray.
Add the beef to a large skillet over medium heat and crumble as it cooks. Drain grease when cooked through.
Add the taco seasoning and water to the skillet and cook for 2 minutes.
Dump the tomatoes, cheese soup, and sour cream into a medium mixing bowl. Stir in the cooked meat.
Place 3 tortillas in the bottom of the prepared baking dish. Top with 1/3 of the meat mixture.
Repeat layers, ending with a layer of tortillas on the top. Sprinkle the cheese over the top.
Bake for 20 minutes or until hot and melty.
Serve sprinkled with chopped cilantro, guacamole, and extra sour cream, as desired.