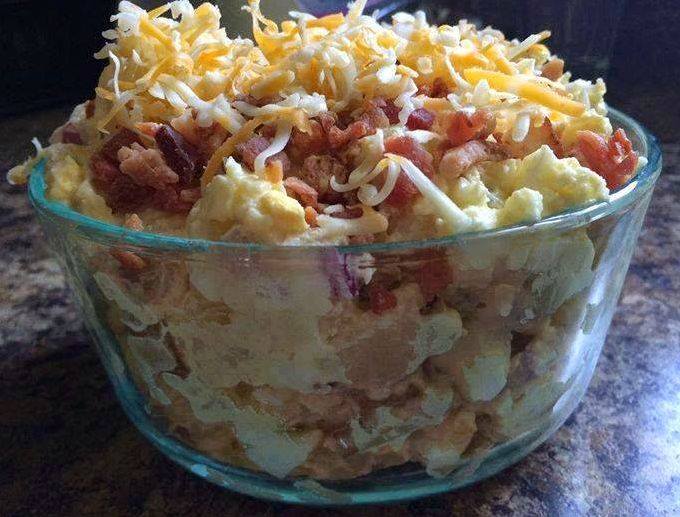 A fun spin on classic potato salad, this loaded baked potato salad is a perfect side dish to bring along to any party!

My mother in law makes some of the best potato salad I have ever tried. It’s simple with all of the usual potato salad ingredients people love, but it’s amazing. A few years ago she gave me her recipe and I always make it when I bring potato salad to a party or potluck. But I honestly think it always tastes a little better when she makes it. I think some foods just taste better when certain people make them, right?

This past weekend I had planned to make potato salad to take with us to a barbecue at my parent’s house, but decided to do things a little different. Instead of the usual potato salad, I decided to whip up a loaded baked potato version instead.

Once I cooked the potatoes I was a little worried that it might not be as good as the potato salad I’m used to eating. I decided to just go for it and I have to say that I am soooo glad that I did! If you love loaded baked potatoes, then you will love this potato salad!

Let’s be honest, carbs, bacon, and cheese just make everything better. Well, almost everything. But they definitely make this potato salad amazing!

I used a mix of miracle whip and sour cream in this dish, but you can easily increase/decrease the amount of each to your preference. I also threw in the usual loaded baked potato ingredients along with some fresh chives. I think the thing I love most about this is how easily you can customize it to your taste. Enjoy!