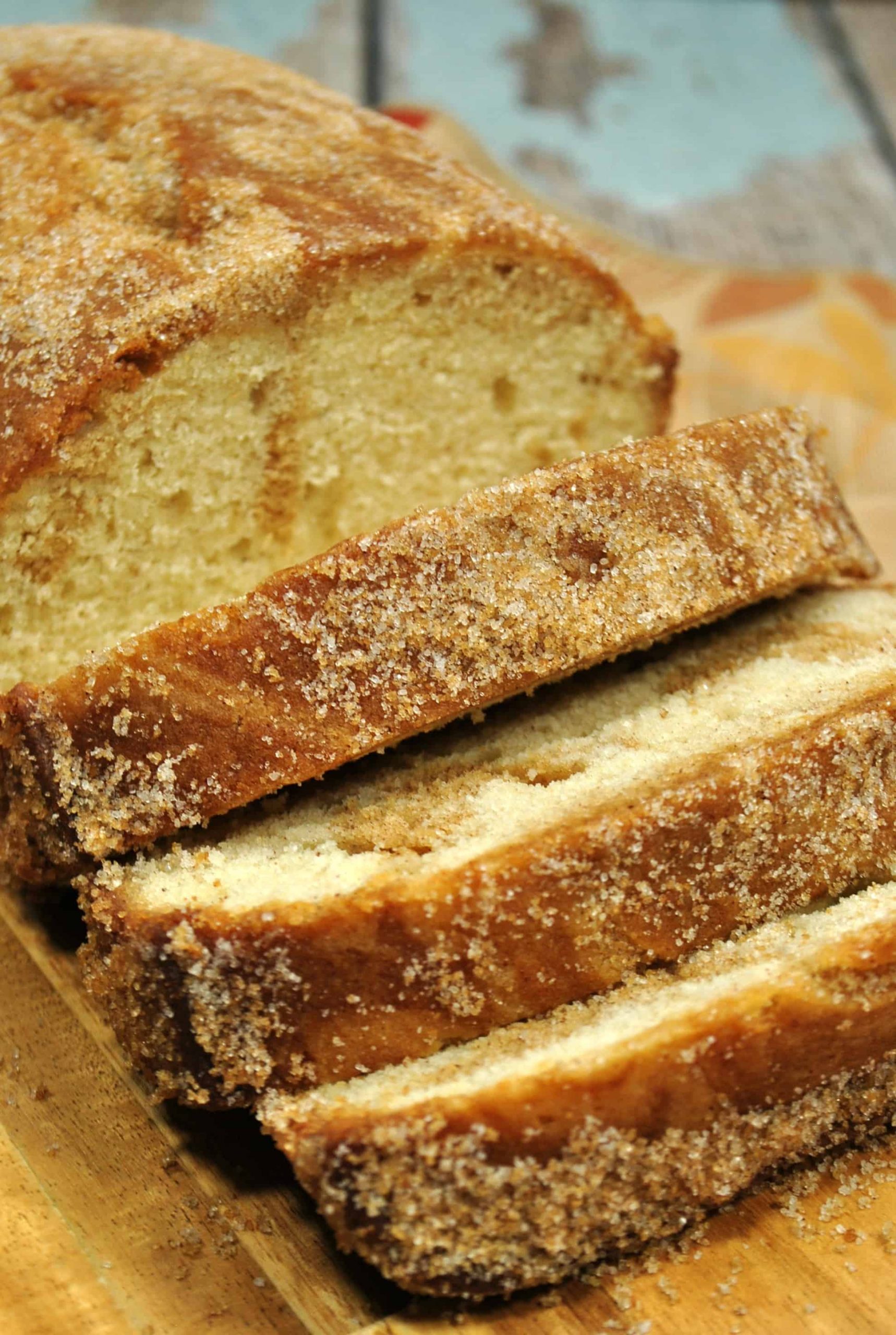 If you love donuts, this is the ideal sweet bread for you. This homemade bread recipe has all the flavors of a cinnamon sugar donut combined with homemade bread. This recipe is “blow your mind” good. You have to try this sweet bread.

Can you freeze bread?

Whenever I make this bread recipe, I like to make a double batch. If you are in the kitchen baking it is just as easy to double the recipe and make 2 batches. This way I have one batch to eat and one batch to freeze. Also, if you think you will not eat all of the bread before it goes stale, you can cut up individual slices, wrap them in plastic and freeze them. This is a great option even if you only make one loaf. Wrap the slices of bread and then you can take out slices whenever you want them without having to take the whole batch out.

How to serve this cinnamon sugar sweet bread

When it comes to serving this bread, it can be served many different ways. You can eat it straight as it is. This is a great way to enjoy this bread. Warm it slightly and serve it with butter or cinnamon butter.

This bread can also be toasted on a very low setting to warm the bread or you can heat it in the microwave.

Jelly– In addition to putting butter on this bread, you can also put jelly on it. This will have a similar taste to a jelly stuffed donut.

Grilled-  I love to put butter in the bread and the grill the slice. Cooked much like a one-sided grilled cheese. It gives a carmalized coating on the bread that is buttery and sweet. It creates a very rich flavor to the bread.

How to make homemade cinnamon sugar

There is no need to buying premade cinnamon sugar. When you find out how simple it is to make, you will never buy the premade stuff again. Making cinnamon sugar is as easy as mixing cinnamon and sugar together. For a basic cinnamon sugar recipe, it is about a cup of sugar to 1-2 tablespoons of cinnamon, but this varies according to taste. The cinnamon sugar topping used in this recipe is slightly different. It used white and brown sugar as well as butter mixed with cinnamon.

* I use 1/2 C whole milk mixed with 1/2 tsp white vinegar as a substitute for buttermilk.